The bridge between the new section of Carlyle Gardens (where we live) and the older section was finally opened to pedestrian and light vehicle (bicycle and golf cart) traffic, so we can now walk over to the restaurant and other facilities without climbing over a ditch to get around the barrier, and we're getting a lot more residents from the other side wandering around looking at the new section.

Do Not Call register

Got onto the Australian Do Not Call website and registered our new phone number. Begone, telemarketers! Not that it's stopped (on our old phone) the people trying to switch me to a supposedly cheaper phone service. I rarely make phone calls, so cheaper calls are not an inducement.

Today I saw a doctor specialising in immunisations for travellers, and was given shots for several exotic diseases, including yellow fever, typhoid, and hepatitus A. The yellow fever immunisation is a requirement for getting back into Australia. To my surprise, I found my (now very battered) old immunisation record card from the 1960s, when I was going to North Africa... at which time I had yellow fever and cholera shots.

Planning a trip to South America

I've been organising a trip to South America in July: Venezuela and Peru, flying into and out of Santiago de Chile. The Venezuela part (11 days) is being organised by the family of a friend, but I'm putting together the Peru part (another 11 days), tours to Cusco, Macchu Pichu, Arequipa, Colca Canyon. And all the air travel is up to me. I'll be flying on LAN, a Chilean airline. I wanted to book all my flights through the LAN website, so I can track and manage them online. Unfortunately, the website refused to process my credit card most of the time, despite getting it right once. Wanting to be sure to have the trans-Pacific flights locked in (just in case their very favourable business-class fares disappeared without warning), I fought my way through their telephone system to reach a human, who could only accept payment in US dollars... so I got stung with an extra card fee for that. Eventually I gave up trying to book the other flights and got a travel agent to do them, along with the tours I'd selected from the Tempo Holidays brochure. The Tempo website is hopeless.

On evening walk with Eric, stung on ankle by a wasp. Wow! That HURT. Can't recall the last time I was stung—many years ago. Fortunately an ice pack seems to have dealt with the swelling (not bad) and the pain. (After quick check on web of first aid for wasp stings.)

Eric finally got the Belkin wireless ADSL modem/router to connect to the Internet. Several default settings were wrong for Australia. Hard to diagnose. Once the settings were sorted, the gadget worked just tine. Eric's blog has the technical details. Note: his blog is written in valid xhtml, so Internet Explorer does not display it.

Back on broadband, despite hardware issues

The broadband service at our new house is now active. Unfortunately, our new wireless modem refused to connect to the internet. Eric spent a lot of time trying to work out what was wrong, without success; he'll work on that some more this weekend and try it out on our service at Airlie Beach. We did have an ancient modem, which worked, so we know the connection at Carlyle Gardens is working. Unfortunately, the ancient modem runs only one ethernet connection (not wireless), so we're a bit limited until Eric gets the technical problems figured out. He's gone off to Airlie Beach for the weekend he was planning to go anyway), where he can use our connection there and try to find out what's going on with the modem -- and how to fix it. (We both assume the modem will work fine there; one of the corollaries to Murphy's Law...) Meanwhile, I'm on broadband again at the new house.

A complete switch to Linux may be coming on my main machine: the Windows XP partition won't load, even in Safe Mode. Spent a bit of time trying to get Windows going again, without success. I don't know enough to really be able to solve this problem, and to be honest I'm not createdly motivated to find out. Ubuntu works fine, and I do have a WinXP partition on the Eee PC for the rare occasions when I actually need to use it.

Yesterday and today were shop-till-you-drop days: table, chairs, lamps, side tables, hardware and household stuff. Slowly getting organised. Today we ordered a "dining" table, which should be delivered in about 3 weeks. I put "dining" in quotes because we normally use our table for everything else as well as dining, and some of my/our hobbies can be a bit hard on the surface... so we bought a table being sold as a desk or conference table. It looks very much like a slightly larger one being sold as a modern style dining table (white top, stainless steel legs), so we figure it can't be too weird... not that we care. That store didn't have any chairs we liked, so we went next door and bought 4 chairs of a style used in conference rooms. We looked at a lot of dining-type tables and chairs, but couldn't find any dining-type chairs that were comfortable to sit in, so that contributed to our decision to buy conference-room items. In addition to being comfortable, these chairs look quite nice and should go well with the table. Two were in stock; the others should arrive late next week. They were a discontinued model, so on sale... a nice bonus. Update: Here's a picture taken after the table and chairs were delivered. 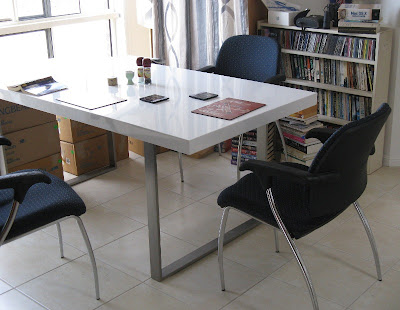 Eric now has a wireless network working with our dial-up connection, so we can both be online... slowly.

We don't have any nearby neighbours yet. The nearest is at the other end of our street, about 6 houses away. None of the intervening houses have been sold, though the one across the street has an "Option" sign on it. Officially we live behind the barrier in the construction zone, along with 3 other households (out of more than 15 houses). This part of Carlyle Gardens is called the "West Side" by the sales staff and the "Far Side" by the residents. Considering what a bunch of characters some of them are, the Far Side seems like a suitable designation. We're going to fit right in, I think.

The telephone technician showed up right on time today, so we've now got a landline in the new house and I can at least use dial-up access to the internet through the ISP (iinet) that we've been using at Airlie Beach.. Slow, but better than nothing. I immediately applied for a broadband internet connection from them. We've been happy with their service, and we especially like the fact that they provide a dial-up number at no extra charge to use if needed (like now) and they are friendly to Mac and Linux users.

On March 5th we drove to Townsville, got a bank cheque (after some drama, when the only person authorised to do it wasn't available; the other staff were heroic in finding a workaround), then handed over the cheque and got the keys to the new house. That afternoon and Friday morning we spent shopping for essentials like a bed, a refrigerator, and a washing machine, plus some other odds and ends. On Friday afternoon our purchases were delivered. Eric then casually mentioned that a large, very severe cyclone was heading down the coast from near Cairns. (See separate entry.) Packing was our major activity for the next two weeks. As soon as the cyclone was gone, we phoned a local removalist (who doesn’t advertise; he gets all his business by word of mouth, and several locals had mentioned him as the person to contact). Our possessions were picked up on the morning of 23rd March and delivered on the morning of the 24th. During the afternoon of the 23rd we drove to Townsville so we were there in time to meet the removalist when he arrived—at around 7AM as it turned out. We laughed when he (apparently quite bemused by the number of bookcases and boxes of books, the office equipment and recliner chairs, but little else) asked if we were going to buy some furniture. There’s certainly enough room for it! 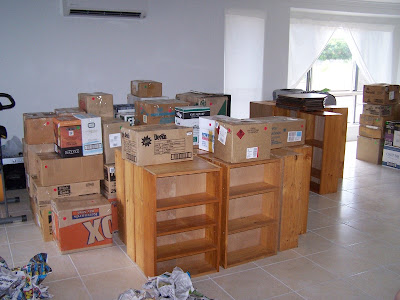 Since then we’ve been unpacking. But first we had to reassemble the Ikea shelves... which of course don’t quite fit in the spaces available. The open-plan kitchen/loungeroom is huge but has limited wall space once we work around the air-conditioner outlet, the windows, the doors, the kitchen bench, and the switches for lights and ceiling fans. We’ve built one ‘wall’ of shelves between the dining area and the lounge area and are contemplating what else we might do. 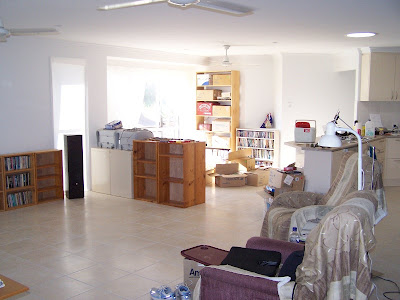 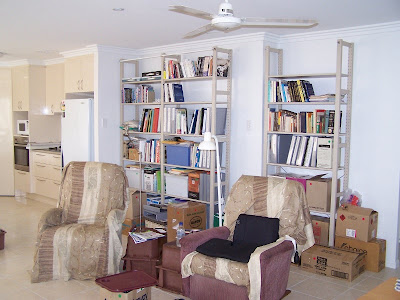 My office is functional but, alas, there’s no internet, nor a working phone line, into the house. Eventually we’ll have internet (and other services) through the fibre-optic connection, but in the interim we need to organise a temporary solution. Shopping has also taken up a lot of time. In addi­tion to food, we needed to buy a variety of household goods to replace ones we deliberately didn't bring (or didn't have). The weather's been good, so the landscapers have been madly working around our house (and the others on our block). Mountains of topsoil are being spread; from the smell, it's fertilizer-enriched. Hope the sod and plants arrive soon. 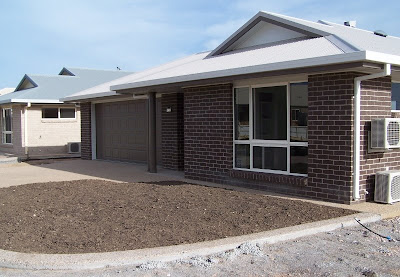 On Saturday (7 March) we rushed home to beat the rain and bring everything in off the balconies so it couldn't blow around. The cyclone was expected to pass by offshore from Airlie Beach early Sunday morning, accompanied by destructive winds and heavy rain... a combination likely to flood or wash out some bits of the road between here and Townsville, and/or cut off the electricity, even if nothing worse happened. Fortunately, we had minimal impact in Airlie Beach; the wind direction was such that it hit the ranges to the east and south first, leaving us in a relatively protected zone. And the cyclone stayed just far enough offshore that we were outside the zone of the worst winds and rain.

On Sunday morning Eric went for a reconnaissance walk and said he saw no damage or flooding, though the beach is mostly underwater from the very high tide. Numerous shops (normally open on Sunday) were closed and battened down (tape on the windows, plywood over the door). 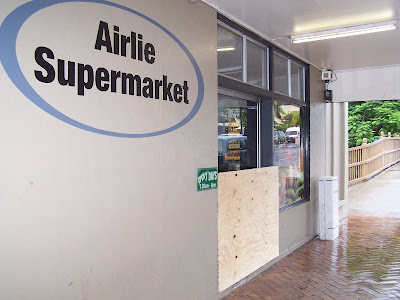 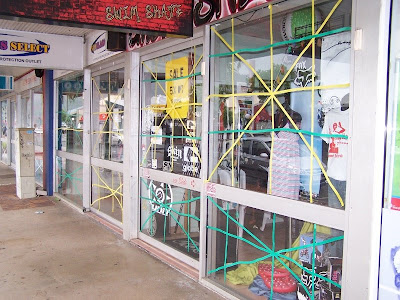