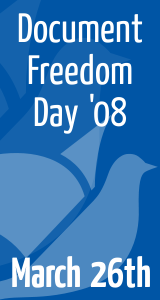 A news release from the folks behind Document Freedom Day (DFD) says that 26 March is "a global day for Document Liberation with grassroots action for promotion of Free Document Formats and Open Standards in general. The DFD was initiated and is supported by a group of organisations and companies, including, but not limited to the Free Software Foundation Europe, ODF Alliance, OpenForum Europe, IBM, Red Hat and Sun Microsystems, Inc." If you'd like to advertise this event, the DFD website has some nice banners and wallpaper.

In addition, for those particuarly interested in promoting ODF (OpenDocument Format), Pete Harlow has produced a banner ad (see below) and a set of wallpapers for various screen resolutions.

The wet and windy weather returned overnight, after a few days of intermittent rain while the storm went south 150 km and caused major flooding in Mackay. Then the storm turned around and came back to us last night. Actually, there's been lots of rain all up the coast and all the usual roads are flooded (again), so the truck with the Saturday newspapers couldn't get through and AFAIK flights in and out of the airport were cancelled (perhaps because people couldn't get to or from the airport, or perhaps because the runway needed repair after water damage earlier in the week). The good news is the electricity has stayed on, except for one 45-minute outage a few days ago. Our backup power supply kept the internet connection working and of course the laptop kept going, so I just carried on working. The phrase "surfing the Internet" takes on a new meaning when the weather's like this. Down in Mackay, they're cleaning up the mess. People are warned to stay out of the floodwaters because of the danger of crocodiles.

Heavy rain and wind overnight on the 12th tossed yachts onto the beach and the rocks, here in Airlie Beach and at several other places on the coast and in the islands. Eric didn't take the camera out into the rain when he went on a futile quest for the morning newspaper (the truck had been delayed by the weather), but he said he counted at least 14 yachts on shore, most of them looking decidedly the worse for wear -- and that's just in the 500 metres of our town. This picture is taken a bit further along the coast towards Cannonvale. 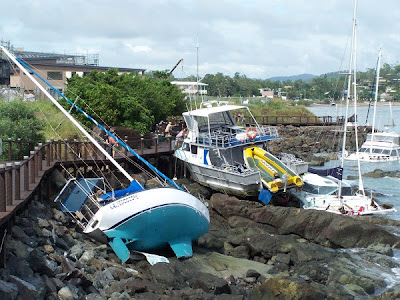 The newspapers did get here later in the morning, but then the roads north and south were cut by floods, as is usual folllowing heavy rain; this includes the road to the airport. We're on high ground and doing fine. Haven't heard if more landslides have occurred in the area, or how many trees are down. So far the electricity has stayed on. We actually had surf on Wednesday morning! Only a few feet high (perhaps as much as two metres?), but that's pretty exciting given that our "surf" is normally only a few inches high. People were out on surfboards. 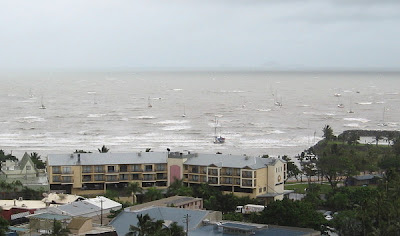 Today (Thursday) Eric and I walked along the beach and photographed some of the damaged boats. An album with a selection of photos is here: http://avalook.com/airliebeach/airlie0802/

Around a year ago I was invited to join a group of people writing a book, to which each of us is contributing one chapter. I was (and am) enthusiastic because the contributors (most of whom I know, at least professionally) are encouraged to "write in a lively style, deliver lots of interesting content, introduce and analyze intriguing trends and problems, take a chance and prognosticate". Cool! Permission to be opinionated! The deadline for submission of the first drafts is the end of February. My goal was to have mine done by the first week in February. Today I sent it off to the book's editor. No doubt I'll need to do extensive revisions after receiving the editor's comments, but for now I'm heaving a sigh of relief. It's been fun, and I love writing books, but I find the process very time-consuming and mentally tiring.

While following links from another blog, I discovered a fascinating website done by a Canadian woman, Krista Scott-Dixon, who is into weight training and some martial arts, among other things. The weight training section starts here. It's full of interesting info and rants about various topics, and there's a blog. The section of the site about her was interesting reading, too. For about 10 years Krista was an academic (in women's studies), so the "academientia" section of the site includes items like her PhD thesis: "From webgrrls to digitaleve: the gendered practice of women's technology work and organization" (2002). She's also published a book titled "Doing IT: women working in information technology" (2004). Krista has an amusing writing style, and lots of attitude! I'd love to meet her. Maybe when I next visit Toronto...